During Black History Month, Downtown West Palm Beach honors the contributions of African Americans; especially in our #DowntownWPB. Our diversity is what strengthens us! Residents who identify as Black or African American account for 34.4% of the city’s population, according to the 2020 U.S. Census. Explore experiences and learn how African American culture adds to the vibrancy which helps move the city forward in exciting new ways.

Join us as we continue to celebrate the contributions of our incredible Downtown West Palm Beach community.

Enjoy this showcase of young talented black artists amplifying their voices in our community. We encourage you to share their talent and support.

Support local black-owned businesses and their contributions to the energy of the Downtown district.

Observe Black History Month with a series of events offered by the Kravis Center, Historical Society of Palm Beach County, the Mandel Public Library of West Palm Beach and more throughout the month of February!

Notable Contributions in our District

The City of West Palm Beach has a rich, diverse history. Did you know that Black or African American residents comprise 34.4% of our city’s population? (reference: U.S. Census) Read about some of the many contributions to our city’s history: Click Here 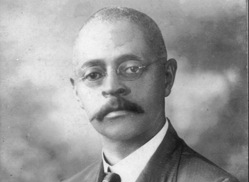 Thomas Leroy Jefferson (1867-1939): Thomas Leroy Jefferson was born in Hazelhurst, Mississippi. Jefferson taught school in New Iberia, Louisiana, while he ran a drugstore. He attended Meharry Medical School in Nashville, Tennessee, and first practiced medicine in Orange, Texas, and New Orleans, Louisiana. In the early 1900s, he moved his family to Palm Beach, where he opened a medical office in the Black community known as the “Styx.” By 1912, after the residents of the Styx moved to West Palm Beach, Jefferson opened a medical office on North Olive Avenue and a drugstore at Clematis Street and Rosemary Avenue. He was the first Black physician in West Palm Beach and was known as the “bicycle doctor” because he was frequently seen making his rounds and house calls on a bicycle. Jefferson continued to provide medical care to the Black community until a few years before he died. Today, the T. Leroy Jefferson Medical Society, the namesake of the doctor, is a healthcare professionals’ organization that focuses on helping underserved populations in our community. 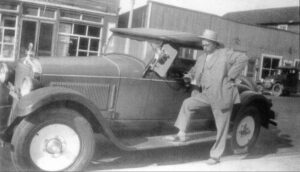 James Jerome “Cracker” Johnson (1877-1946): Born in Savannah, GA in 1877, Cracker Johnson held tremendous influence as a result of his “business activities” including gambling and bootlegging. At sixteen he became a cabin boy on a freighter. This job provided the opportunity for him to travel and see other cities. He then worked as a constable before moving to Florida where he established a moonshine business in 1899. Johnson also developed gambling and pawn brokering businesses and used the money to purchase real estate all over Florida. In 1921, Johnson built a red brick jail to house Blacks at the corner of Second Street and Rosemary Avenue, due to Blacks being jailed outside of the city when arrested because of segregation. Cracker Johnson provided money for the strained city budget to purchase tools and equipment for criminals to use while incarcerated. He later loaned the City $50,000 to balance the budget. Cracker Johnson also owned and operated the Florida Bar on Rosemary Avenue where the employees were required to dress in cut-away dinner jackets, tuxedo trousers, winged collared dress shirts with studs and cufflinks and bow ties. Cracker Johnson married Ella Johnson in Quincy, Florida and they had two daughters, Marguerite and Edye. According to tax records his earnings in 1926 was $687,000; in 1927 it was $792,000 and in 1928 it was $971,000. His church, the Boy and Girl Scouts, his lawyers, those seeking a college education, and anyone who was in need, knew him as a philanthropist. Cracker’s home had an automatic sprinkler system, special awnings that served as shutters. Cracker Johnson’s house still stands today in West Palm Beach. 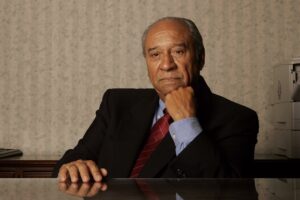 Thomas Rudolph Vickers (1879-1965): Thomas Rudolph Vickers was born in Key West and graduated from Howard University’s medical school. In about 1912 he started a medical practice on Rosemary Avenue, one of seven Black pioneer physicians in West Palm Beach. Dr. Vickers owned a home mortgage-free at 911 First Avenue in the 1920s and 1930s and moved to Palm Beach Lakes Boulevard in 1939. During segregation, he provided affordable medical care to the Black community. Dr. Vickers was considered a role model for his personal achievements and his contributions to the community in service and leadership. Dr. Vickers was named a Great Floridian 2000 by the Florida Department of State and the Florida League of Cities. Dr. Vickers’ house was restored and currently operates as a community resource center.